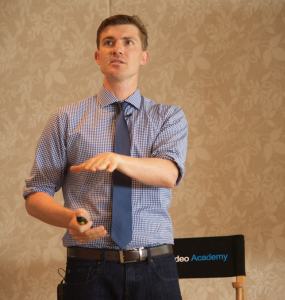 The injustices of mass incarceration influence every American citizen. That’s why I feel passionately about working to help. As Justice Anthony Kennedy said to the members of the American Bar Association, far too many people serve sentences that are far too long. Further, as recidivism rates show, the longer we expose someone to corrections, the less likely those people become to function as law-abiding citizens after release.

I cold called Brandon Lucero, CEO of Sold With Video. He’s a leading expert on teaching business owners how YouTube marketing can bring in more customers. After explaining challenges the formerly incarcerated face in finding employment, I asked Brandon to be a guest on my Earning Freedom podcast. During our 30-minute podcast, Brandon taught our listeners strategies he used to launch his business without having any money at all.

Brandon advised that anyone, including the formerly incarcerated, could use YouTube to create an income from nothing more their phone and the willingness to try. If they had a talent, skill, or commitment, they could find all the customers they wanted by following the same steps that he used to build Sold With Video.

The first step, Brandon advised, was to consult the Google Keyword Planner Tool. It’s free! After signing in with Google, they could begin searching for the types of “keywords” that people use to find specific products or services they need. For example, Brandon advised, if a person became an expert in fitness while in prison, and wanted to work as a personal trainer, Brandon suggested the person could type personal trainer into the search bar. The Google Keyword Planner tool would offer ideas for other search terms that visitors might use.

By researching keywords, Brandon advised, a person could find problems people were struggling with and wanted to solve. Then, with nothing more than a smartphone, a person with a commitment to succeed could create a video. The Video would show people how to solve the problem. Rather than using the video to give the “why” for the problem, he suggested that the video should be direct—offering answers for the problem that the customer wants to solve. If it’s a recipe for gluten-free cookies, Brandon urged listeners to film a video showing the recipe rather than explaining the benefits of gluten-free cookies.

Brandon used that same strategy, he said, to launch his business. Without having any financial resources, he walked into local businesses and offered a value proposition. For $1,000, he would film a video and make sure the video ranked on the first page of Google. At the time, he said that he didn’t even have a camera. When a business owner recognized the value, Brandon landed his first customer. He used the first payment to purchase the necessary camera and went to work. Since then, he has repeated the strategy over and over again to build a business that has generated six-figure revenues.

Instead of asking for a job, Brandon suggested that the formerly incarcerated should use the same strategies he used to build a successful business. By showing others how he could create value for them, he has thrived. And when selling services to help business owners generate more customers, no one asks about criminal background checks.

The formerly incarcerated can learn a great deal from successful entrepreneurs like Brandon Lucero. I know that I have!