At the very tender age of 11, Erik Jensen was living in an abusive, single parent household with daily violence fueled by alcoholism. He sought escape on the streets, committing theft, selling and using drugs, and was always in trouble with the law until Erik found himself in some of the worst prisons in New York. 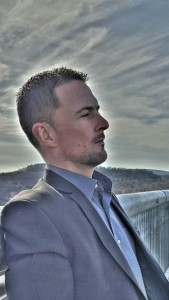 From his late teens to mid-twenties Erik was convicted on an array of charges including Robbery in the Second Degree, Promoting Prison Contraband, and Criminal Possession of Stolen Property in the 4th Degree. He ended up serving 12 years collectively in the New York State Department Of Corrections. He did his time at Greene, Franklin, Watertown, Bare Hill, Five Points, Attica, and in 2011-2012 at the now infamous Clinton Correctional Facility in upstate New York. It was there he became well acquainted with inmates David Sweat and Richard Matt. On June 6, 2015, the two convicted murderers pulled off one of the most daring prison escapes in recent history.

During his imprisonment Erik was witness to atrocities perpetrated against fellow inmates by several of the guards. He also observed abominable behavior inflicted on inmates by each other, convincing him that the U.S. penal system takes in the bad and instead of rehabilitating, it makes them worse.

Erik is a self-taught scholar in the field of prisoner transformation. He uses his own personal experience to revitalize the mind and spirits of men and women who have shared a similar path in life. Through his words, Erik illustrates that we are much more than the worst thing we’ve ever done, and that the potential for doing good resides within every one of us.

Given his vast knowledge of the Department of Corrections; Clinton Correctional Facility; David Sweat, Richard Matt and their escape; their accomplices, civilian worker Joyce Mitchell and guard Gene Palmer; plus the barbaric culture of the prison system, Erik Jensen is a consultant on an array of projects with television networks and major motion picture production companies. He is a producer for an upcoming Netflix series, based on the Clinton escape; directed by Jodie Foster, and Executive Produced by Bryan Zuriff and Brett Johnson of Ray Donovan and Mad Men.

Erik has been interviewed more than 40 times live on over a dozen networks, including CNN, ABC, CBS, NBC, HLN, TWC, PIX11, WNYT13; plus numerous other news media, such as GQ, People, and Time magazines. He has appeared and played a prominent role in television specials: Nightline, Outside The Wall, The Great Prison Break, Inside Edition, Up Close with Marvin Scott, 360 Anderson Cooper, Outfront with Erin Burnett, At This Hour with John Berman and Kate Balduan, and Dateline: “The Accomplice” with Matt Lauer.

Erik continues to share his views with the world by consulting on disturbing issues in the prison system nationwide, such as corruption, physical and mental abuse, and the long-term effects of solitary confinement. He has participated in myriad televised debates hosted by award winning journalists such as Deborah Feyerick, Randi Kaye, and Jessica Schneider.

He is also frequently invited to the “Earning Freedom” podcast. A California based show created by Michael Santos that is broadcasted in jails and prisons nationwide.

SUNY New Paltz welcomes Mr. Jensen every semester to speak with students studying Criminology. He also volunteers at Redhook Residential Youth Facility, where he shares his story of recovery and redemption with juvenile delinquents.

He also volunteers with numerous criminal justice reform organizations including but not limited to: Cut50, Prisoner’s Legal Service, and Beacon Prison Action. His memoir is due out in 2017.

Contacted and interviewed by Jessica Schneider

At This Hour with Berman and Balduan

Contacted and interviewed by Randi Kaye

Contacted and interviewed by Carol Costello for later broadcast and syndication

Contacted and interviewed by Deborah Feyerick

Up Close with Marvin Scott

Contacted and interviewed by Jessica Layton

Contacted and interviewed by Michael Howard

Contacted and interviewed by Cole Louison

Contacted and interviewed by Jeff Truesdell

Contacted and interviewed by Jamie Schram

(My sound bites used in an article on The Great Escape)

Contacted and interviewed by Gabrielle Bluestone

Contacted and interviewed by Margaret Hoover

AREAS OF ANALYSIS INCLUDE: