Some may find it strange that the CEO of a publicly traded company would speak with a man who served 26 years in federal prison. But Lew Cirne, founder and Chief Executive Officer of New Relic, took time out of a busy Friday to meet with me in his office. He shared perspectives on leadership, citing the Book of Matthew, verse 25. As a corporate leader, Lew wanted to improve society in every way, including offering guidance to those in struggle.

While listening to Lew, I learned a great deal. Strategies for building world-class technology companies were similar to strategies necessary for emerging from prison successfully. I present stories like Lew’s on the Earning Freedom podcast because I want to inspire people in prison or those who’ve been released from prison.

On some episodes of the Earning Freedom podcast, I describe steps I took to maintain a high level of energy and discipline while climbing through decades in prison. On other episodes, I interview formerly incarcerated individuals who emerged successfully. And on others, I interview leaders like Lew. Taken together, the daily episodes on Earning Freedom show that we can triumph over the challenges that follow imprisonment. Business leaders like Lew teach us a great deal. They did not reach their high levels of success without overcoming challenges along the way.

Lew credits his start in technology to a gift. When he was 12, his parents gave him a computer. While other boys used their computers to play games, Lew taught himself to write computer codes. The harder he worked, the better he became at coding and he began to write his own computer games. His ingenuity and persistence resulted in others taking notice of him. Officials at Dartmouth recognized his brilliance. Lew earned his degree in computer science from the Ivy League university, becoming the first university graduate in his family. 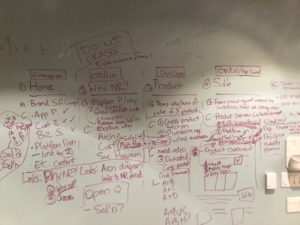 Lew started his career at Apple, where he worked on operating systems for a few years. Wanting more, he persuaded people to believe in him. They offered capital for Lew to launch his first venture, Wily Technology, a company that he sold a few years later to Computer Associates for more than $300 million. Then Lew started New Relic, a company that now employs 700 people. One of his greatest accomplishments, Lew said, was inviting his parents to the New York Stock Exchange on the day of the company’s IPO. The stock market now values his company at more than $1.5 billion.

Lew has enjoyed enormous success in his life and career. In listening to his story, we see that each success followed a pattern. It began with him looking at a challenge, a problem, or pain point. He figured out ways to solve the problem. Then he put a plan in place and took incremental action steps. He built teams around him, then he established accountability systems to measure progress every step of the way. That methodical approach to problem solving led Lew to find opportunities in the marketplace. The more Lew and his teams delivered, the more opportunities opened for them to contribute.