Early release from prison begins with preparation long before the judge imposes the sentence. Unfortunately, when someone is charged with a federal crime, that person becomes a defendant. Prior to that instance, the individual hasn’t ever thought about prison or what it takes for an early release from prison. That’s why a defendant should learn more, and the learning should begin long before the person goes to prison. 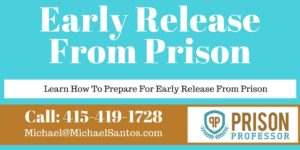 The choices an individual makes at the start of the journey influence prospects for release. In the video I attach to this simple article, I’m interviewing Judge Mark Bennett, a US District Court Judge who has sentenced more than 4,000 people. Besides sentencing 4,000 people, Judge Bennett is well recognized scholar on sentencing. In one of his articles, he wrote about sentence allocution and how the allocution can result in an early release from prison for many defendants.

Without a doubt, every person in prison wants to get out early. Yet if someone hasn’t laid the groundwork in advance, it isn’t going to happen. To get out of prison early, the person needs to plant the seed very early. To use an analogy, if you want to eat a fresh apple that you pick from a tree, first you must plant the seed. Then you must nurture the seed. Then, when the time comes, you pick the apple that the seed as produced.

So plant the seed if you want early release from prison. As Judge Bennett says in the video above, it all starts with your sentencing narrative. I offer all types of books that describe the prison experience, as well as how to write effective sentencing narratives. You can order those books through Earning Freedom Products. Those who want personal consulting on how they sow seeds that will result in early release from prison may want to retain an expert. They can reach me at [email protected], they can visit MichaelSantos.com, or they can call me at 415-419-1728.

When a defendant takes those types of steps, the defendant goes a long way toward advancing later arguments to support an early release from prison.