Federal Sentencing Guidelines used to bind judges. Regardless of a defendant’s personal characteristics, the judges were mandated to sentence in accordance with a range that the federal sentencing guidelines provided. Sentencing law changed in 2005, when the U.S. Supreme Court issued its decision in United States v. Booker. With the Booker opinion, the federal sentencing guidelines became “advisory” rather than mandatory. This change has a huge influence on every defendant in federal court. 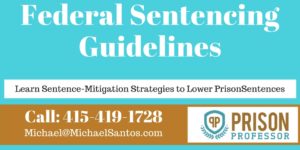 As a consequence of the Booker decision, defendants have an opportunity to influence the sentencing judge. Defendants should expect prosecutors to prepare extensive packages that will influence the judge by arguing why the maximize sentence is appropriate. It’s wise for defendants to recognize that prosecutors consider it their duty to protect society by punishing crime, and at sentencing they’re after stiff punishments.

Probation officers, too, will make a strong case for a punitive sentence. The judge will consider arguments from the prosecutor, the probation officer, and the federal sentencing guidelines, when determining the appropriate sentence.

The defendant’s attorney will prepare a sentencing memorandum to argue the merits of a lower sentence. The Booker decision, however, suggests that defendants have a personal responsibility if they want to p themselves in the best possible position at sentencing. A deliberate plan for a lower sentence should include an well-thought out sentencing narrative.

With a strong sentencing narrative, defendants have an opportunity to become their strongest advocates for leniency at sentencing.

Defendants put themselves in a good position when they invest time, energy, and resources to craft an effective sentencing narrative. If they expect defense attorney to handle everything, they’re really not doing everything possible. Through my work as an advocate, I’ve spoken with several federal judges who told me that defense lawyers frequently failed to tell the full story of the defendant. Judge Frank Zapata and Judge Charles Pyle, U.S. District Court Judges in Tucson, told me that when we had dinner together. Judge Gonzalo Paul Curiel, from the Southern District Court in San Diego said the same thing at a conference in San Diego. Even Judge Charles Breyer, who sits on the sentencing commission, said the same thing when I spoke about Incentivizing Excellence at a conference at UC Hastings Law School.

Unfortunately, many lawyers focus exclusively on the law when it comes to sentencing. In their sentencing memorandums, too many attorneys cite boilerplate legal language that judges already know. Judge Curiel made this precise complaint when he spoke at the conference in San Diego. Rather than reading about laws that Congress passed, and which he knew, he would rather learn more about the personal characteristics of the defendant.

Attorneys do not serve their clients well when they focus exclusively on case law or congressional intent. When I asked Judge Mark W Bennett how defendants could advance prospects for an early release from prison, he said that they should tell the story of their life.

Judge Bennett has sentenced more than 4,000 people to federal prison. As others judges have told me, Judge Bennett said that lawyers frequently didn’t take enough time to prepare their clients for sentencing. If the lawyer didn’t help the judge understand the defendant, the judge didn’t have much of a choice but to rely upon the federal sentencing guidelines when determining the appropriate sentence. When defendants invest time and energy to tell their life stories, they become the best advocate when it came to requesting mercy.

In summary, make sure that judge has a very good understanding of your personal story. Our course on sentencing narratives may help. If you have resources for one-on-one assistance, call or text me at 415-419-1728 / email: [email protected]

Remember: The PSR can influence the length of the federal prison sentence.