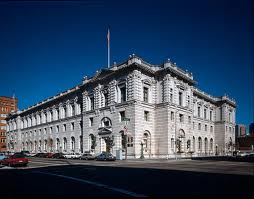 I had an amazing experience attending a Reentry Court meeting yesterday at the federal courthouse in San Francisco. Ms. Shawn Halbert, from the federal defender’s office, told me about the reentry court and invited me to attend. When I looked online to learn more, I read that the court existed to help at-risk offenders navigate their way through supervised release.

The Reentry Court convened every two weeks, but it was different from an adversarial court. The offenders who were on supervised release sat at a table at the same level with a federal magistrate judge, a representative from the U.S. Attorney’s office, a federal defender, and a federal probation officer. The judge presided over a panel discussion to learn about the challenges that each offender was encountering. Together, the group brainstormed about steps each individual could take to overcome the difficulties offenders were facing as they tried to transition back into society as fully functioning citizens. The Reentry Court incentivized offenders who participated in the program by reducing their terms on supervised release by a year if they successfully completed the program.

When I read the online description, I knew that I would not qualify as a candidate to participate in the program. The Reentry Court selected participants in accordance with risk predictors that targeted high-risk, high-needs offenders. Individuals who seemed most at risk of returning to prison were the most likely to be selected into the program.

The selection criteria seemed consistent with the bureaucratic absurdity that I experienced throughout my prison term. For example, the Residential Drug Awareness Program (RDAP) is the only program available to people in federal prison that can result in a reduction of the prison term. To qualify for the one-year reduction of time in prison, the offender must document that he has a high risk of substance abuse. Individuals who do not have a history of substance abuse need not apply.

Incentive programs are wonderful tools. Social science research shows that people respond far better to the promise of incentives than they respond to the threat of punishment; for proof, read the first sentences of the Second Chance Act. But the government misses an opportunity for excellence when it limits its offer of incentives to high-risk offenders. Although policies should incentivize high-risk offenders, those policies should offer incentives to all offenders who want to work toward emerging from prison as law-abiding, contributing citizens. An individual could work for years to educate himself in prison, to build strong family ties, to prepare for employment, but if he could not document a substance abuse problem that existed within 12 months of his arrest, that offender would not qualify for any type of sentence reduction. It wouldn’t matter how hard he worked to overcome the challenges that offenders encountered upon release.

Although I understood that participating in the Reentry Court would not be a viable option in my case, I still welcomed the opportunity to attend. I wanted to listen and learn from Shawn Halbert and to network with government leaders who had an interest in reentry. Through an email message, Shawn introduced me to Judge Beeler, who was scheduled to preside on the court and I was completely blown away when I received a welcoming email from the judge. Then I learned that my probation officer, Ms. Christine Butera-Ortiz, had some conversations with the judge about me and that she would attend the meeting at the Reentry Court. I really looked forward to the experience.

The Reentry Court took place on the 16th floor of the federal courthouse in San Francisco. I showed up just as Judge Beeler was welcoming all of the participants. I recognized some of the offenders from the time when I had to report to the GEO Group halfway house in the Tenderloin district of San Francisco. I sat beside Christine, my probation officer, and took notes as I observed.

Judge Beeler presided over the meeting. I was awestruck by her genuine care and compassion for the offenders. Before attending the meeting I’d done some research and I knew that prior to joining the judiciary the judge had been a prosecutor for the U.S. Attorney’s office.  With her law-enforcement background, I expected to see an attitude of “if you can’t do the time, don’t do the crime.” Instead, Judge Beeler spoke with sincere empathy, showing a real interest in each of the offenders who revealed stories of hardship. She offered suggestions on steps they could take to meet program requirements and advance their prospects for successful transitions. She included everyone in the group, asking for guidance from them. Judge Beeler made everyone in the room feel as if they had value, as if we were all a team, working together to achieve a better outcome. What surprised me most was her level of encouragement to the men who were taking incremental action steps to change their life.

The men certainly did face hardships. While trying to overcome the challenges of a transition from prison to society, they had numerous obstacles in their way.  They had to overcome housing issues. They had to deal with childcare issues. They struggled with balancing the complexities of attending school while simultaneously trying to maintain employment. They had problems with transportation, with financial stability, and with general employment. Bureaucratic obstacles that limited the amount of time they could be away from halfway houses also caused them problems. By meeting each week with the Reentry Court, the participating offenders who had been classified as being at high-risk of reoffending were receiving valuable support. Rather than resenting the Reentry Court, the men were engaged and expressed gratitude for the opportunity to participate.

The court concluded after about 90 minutes. Judge Beeler then thanked me for coming to observe and welcomed me to a meeting in her chambers with Shawn Halbert from the Federal Defenders office and with Christine Butera-Ortiz from U.S. Probation. Imagine that! Five weeks previously I was concluding 26 years in prison. Now, people from the highest level of law-enforcement were inviting me to participate in a meeting so that I could contribute to the discussion.

Judge Beeler was incredibly gracious, expressing her interest in learning more about my thoughts on what we could do to help more offenders transition from prison to law-abiding lives of meaning and contribution. She agreed when I said that preparations for release should begin at the very start of the criminal justice process. My life upon release differed from most long-term prisoners specifically because I started preparing for the challenges I expected to face upon release soon after a jury convicted me. I was working to build a career around all that I learned through my 26-year journey as a federal prisoner, hoping to help more offenders navigate the time wisely. In addition to building the Straight-A Guide in-custody reentry program, I told the judge of my aspirations to do more. I wanted to build Straight-A Guide Staffing Solutions that would connect offenders with employers, and I wanted to build Straight-A Guide Transitional Housing Services.

To succeed in working to change this system, I explained, I had to take incremental action steps:

By maintaining my focus on such projects, I expected to add real value to the Reentry Court and to other government agencies that had an interest in reducing recidivism. Judge Beeler expressed support and accepted my invitation of speaking to my students at San Francisco State University. I am looking forward to proving worthy of these blessings that have been placed in my lap. To do so, I must continue this work of engineering a more effective system of “corrections.”

I’m grateful to have had an opportunity to participate in the Reentry court. The experience inspired me to work harder.