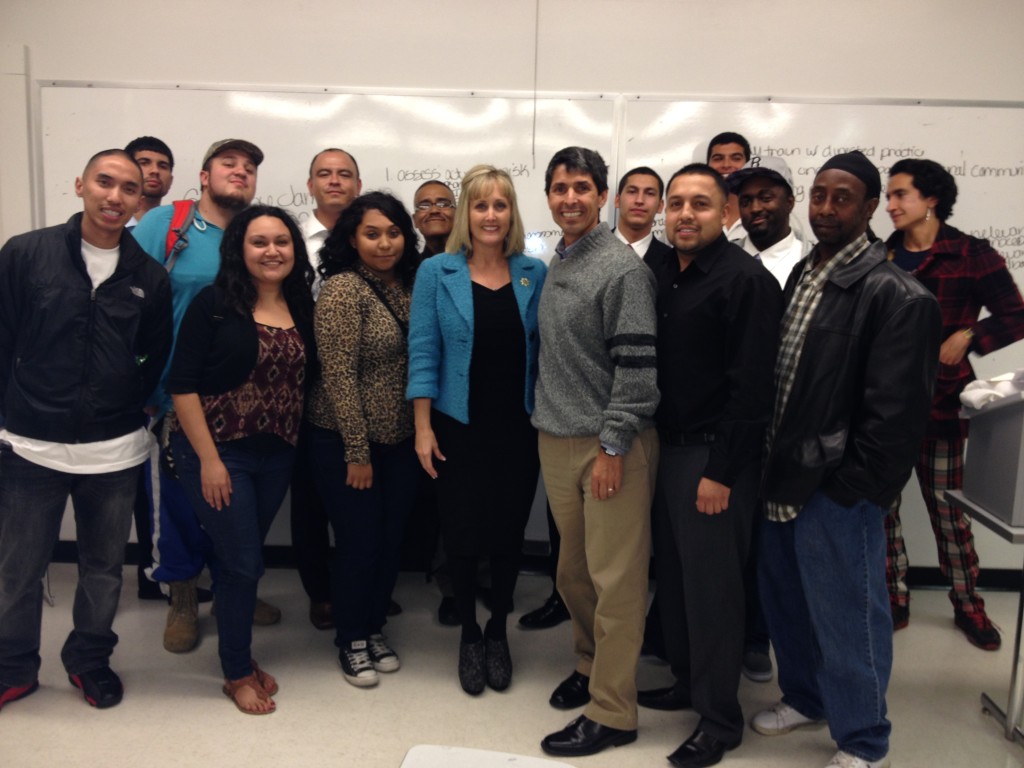 During our 11th week of The Architecture of Incarceration, Stephanie James, the Chief Probation Officer of San Joaquin County, graced our class as a guest speaker. We were all really privileged that she agreed to make the two-plus hour drive from Stockton, California, especially since I didn’t have any resources available to pay her for the trip. Stephanie showed up right at the start of the class and she spoke without notes for more than two hours, helping us to understand the duties and responsibilities of a probation officer in her county.

Prior to her arrival I sent Stephanie an outline to guide her presentation. She followed the outline closely, elaborating in ways that made it easy for the students to understand the role of a probation officer in her county. While listening to Stephanie’s presentation, I took detailed notes that I expected to rely upon when I wrote the summary for this class. But being so caught up in the excitement of having Stephanie with us, I left my leather-bound notebook behind in the classroom and it included my notes. So I apologize in advance to all of the students who rely upon my class summaries each week. I’m going to do my best, but I’ll be writing from memory rather than from detailed notes.

We learned that Stephanie earned an undergraduate and a graduate degree in criminal justice from Sacramento State University. An initial exposure to the probation department convinced Stephanie that she would enjoy building a career as a probation officer and she began with the intention of rising to become the chief probation officer one day.

Realignment was a legislative response to a Supreme Court Case that required the California Department of Corrections to reduce its prison population. The Supreme Court had found that authorities had packed so many people into prison that the conditions violated the Eighth Amendment of the United States Constitution; that Amendment prohibits our government from inflicting cruel and unusual punishment. As a consequence of the crowded conditions, the high court found that authorities could not provide adequate medical care and too many prisoners were dying unnecessarily.

The governor of the state made a number of changes in order to comply with the Supreme Court order to lower the prison population. One change included Assembly Bill 109 (AB 109) which became known as Realignment. It was controversial bill because it would result in a prison downsizing of historic proportions, and prosecutors seemed to be unanimously opposed to it.  Probation officers, on the other hand, were supportive of the legislation for the most part.

Stephanie clarified a common misperception, telling our class that not one person would be released from prison early as a consequence of Realignment. The downsizing would come from a kind of attrition. Specifically, if authorities classified the offender’s current offense as being non-violent, non-sexual, and non-serious, that offender would be diverted to the county’s responsibility rather than the state’s responsibility.

Prior to Realignment, judges could sentence offenders to state prison for hundreds of different types of offenders. Realignment removed that sanction as an option. Since Realignment became law, hundreds of felonies carried sanctions that required offenders to serve their time inside of county jails or under the supervision of probation. Further, Realignment also prohibited people who were on parole from being returned to state prison if they violated technical conditions of their parole. Instead, those people would serve their time in the county jail regardless of the criminal history.

Stephanie explained the complications of this legislation. For one thing, she is a professional and she employs “best practices” with the resources available to her. In a perfect world, she would like all offenders to have “split sentences.” She cited data that showed offenders were most likely to successfully reintegrate with society when judges imposed a split sentence, requiring the individual to serve a portion of the time in custody and a portion of the time on probation. Unfortunately, Stephanie said that many offenders were sentenced to “straight-time,” meaning that once the offenders concluded their time in custody, the straight-time offenders returned to society without any type of obligation to meet with a probation officer.

Another problem with Realignment, as I understood Stephanie to say, was that the law only took into account the individual’s current crime. In other words, the Realignment law required offenders to serve their time in the county if authorities categorized the current offense as being:

This law presented a problem for county officials because Realignment only took into account the current offense. Realignment failed to take into account the criminal history of the offender. As a consequence, Stephanie and her colleagues in the county now find themselves overseeing offenders who have histories of sexual offenses, violent offenses, and serious offenses. In her opinion, state prisons may be better equipped to handle offenders who have those types of criminal histories, even if the current offense is categorized as being non sexual, non violent, or non serious.

Counties also have a huge problem because many jails are notoriously overcrowded. In San Joaquin County, the jail system has been under a judicially mandated population cap for 20 years. To comply with that order, the sheriff has had to release offenders before they served their sentences. He has deemed all parole violators who served time for technical violations as being the first category of offender to be released when the jail approaches maximum capacity.

Rather than complain about the complications that Realignment presented, Stephanie James exercised her leadership and took action. The State of California disbursed a total of about $1 billion each year to the California’s 58 different counties. Each county received a portion of that $1 billion. Stephanie reserved her portion of the resources to professionalize the office.

When I write “professionalize” the office, she retained a team of academics and consultants who would help her develop and implement a series of risk-assessment tools. Probation officers would work with offenders to complete the forms. The questions would look at both static and dymanic factors. We’ve discussed both static and dynamic factors in class, so students should be familiar with the terms. Static factors are factors that the individual lacks the capacity to change. An example of static information would be:

Individuals do not have the opportunity to change the past, and so they cannot change their static factors. With dynamic factors, on the other hand, individuals may engage in programs or educational opportunities that can balance or mitigate their scoring on the risk-assessment instruments. Probation officers work with offenders with hopes of inspiring them to pursue adjustments that will advance their possibilities for success in society.

A computer program assesses the responses that offenders give to the questions on the forms. Those assessments will result in probation assigning a “treatment plan” for the individual. They will customize the plan in accordance with the offenders needs, as identified by the risk-assessment tool.

Stephanie spoke a lot about the dual responsibilities that probation officers must accept. On the one hand, they are part of the law-enforcement community and they’re charged with preserving community safety. On the other hand, Stephanie James sees probation officers as having a role in helping to transition offenders into society as law-abiding, contributing citizens. In that role, she appreciates the responsibilities of being a social worker, ensuring that the client receives the appropriate treatment plan.

With that end in mind, Stephanie has used her discretion to make many changes:

As a result of the changes that Chief James and her team implemented, preliminary indicators showed that recidivism has taken a sharp drop from the rates of similarly-situated offenders prior to Realignment. She was only cautiously optimistic, though, as studies ordinarily require three years of data collection and Realignment has only been in existence for two years. Still, there is room for hope.

When I asked Stephanie about the individualized treatment plans that San Joaquin County used, she impressed us all by being able to name from memory the eight different criminogenic factors that the risk-assessment tools seek to measure. Then she told us how probation officers relied upon that data to determine which treatment programs the offenders needed. I would like to provide those eight factors as a part of this summary, but since I lost the detailed notes I took during Stephanie’s presentation, I cannot. Perhaps one of the bright students of our class will write those eight criminogenic factors in a response to this post. Ten points extra credit for anyone who does!

At the end of her presentation, Stephanie offered the students in our class specific advice that may advance their candidacy for a job with San Joaquin County Probation. Besides earning a degree in criminal justice, students may want to do some of the following:

For those who would like to communicate further with Chief Probation Officer Stephanie James, I provide her contact information:

As an aside, I want to thank Sammy Nunez and his team from Fathers and Families of San Joaquin County for joining us today. The Fathers and Families organization is one of the Community Based Organizations that works with San Joaquin County and it is looking for bright interns who may want to obtain the type of experience that would advance a job candidate’s application.