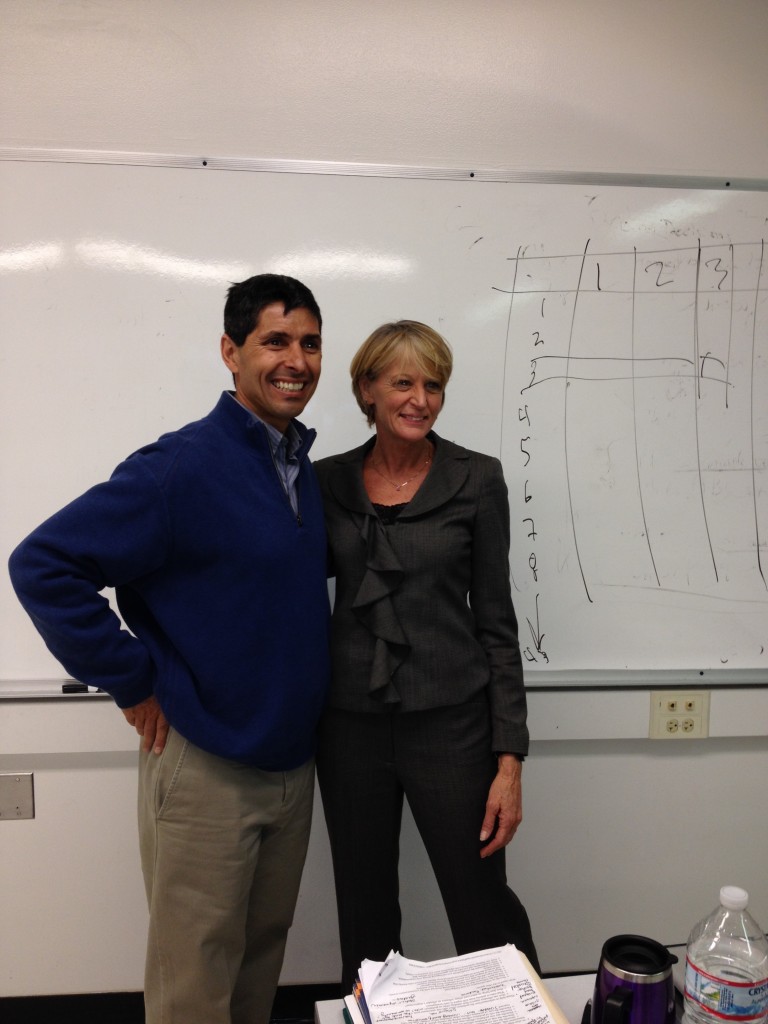 I’m very pleased to have had another guest speaker for the 12th week of our class on The Architecture of Incarceration. As I mentioned several times before, I expected Christine Butera-Ortiz, my probation officer, to speak with our class today. Unfortunately, she wasn’t able to attend.

The day before Christine was scheduled to appear, Christine’s supervisor issued a directive that prohibited her from attending my class. Christine was very apologetic. She had been counting on making her presentation and didn’t expect that anyone would have an issue. But Christine’s supervisor wanted to keep clear lines of separation between her role as a probation officer and my role as a former offender. Since Christine was responsible for overseeing my compliance with conditions of release, the supervisor didn’t want Christine attending a class that I was responsible for teaching. I could understand that position, but the decision brought me a new level of anxiety.

In addition to Christine, other guest speakers were supposed to attend. One was a female offender and our class was especially eager to hear from her. Her name was Toni. I received a letter from Toni that expressed frustration that the supervisory probation officer precluded her from attending. That letter indicated the probation department was preventing her from speaking to our class because the probation officer thought it may be unethical for her to assist me in teaching a course at San Francisco State University. Apparently, the probation department did not grasp that SFSU hired me specifically because to provide students with different perspectives on the criminal justice system and that one of my responsibilities was to bring in guest speakers.

All of these last-minute developments concerned me. I’m scheduled to remain on supervised release until 2036. That means authorities could return me to prison for technical reasons rather than for violating a law. Since my liberty hung in the balance, and supervisors were second guessing my probation officer’s decisions, this news concerned me. My work required that I work toward bringing more awareness to the prison system and that I work to help other offenders who wanted to transition into society as law-abiding citizens. Accordingly, I routinely met with law enforcement personnel and with people who had felony convictions.

Some probation officers might not approve of my working in this capacity. Based on what happened with Christine, I had began to worry another probation officer might overrule permission I received from Christine to work toward building my career. For example, a supervisor might not want me to work with other people who had felony convictions. I wanted to understand more about such complications and I was glad that our fill-in guest speaker, Sharon Alberts, brought clarity on the duties of a federal probation officer.

Sharon Alberts earned her undergraduate degree and her graduate degree from the University of California, Santa Barbara. Sharon told our class that when she lived in Santa Barbara she began working at a halfway house on a volunteer basis. Her responsibilities in that position included checking the residents in and out as a monitor, performing census counts, and facilitating programs that were designed to help people transition into the community after their release from prison.

Sharon’s experience as a volunteer led to her finding a fulltime position with a halfway house in San Francisco. Our guest speaker from the previous week, San Joaquin County Probation Chief Stephanie James, also spoke about the importance of beginning a career in law enforcement with volunteer work. Students who aspired to careers in probation, then, should think about internships they could pursue. Any type of experience in working with offenders advanced a job candidate’s application.

Sharon built a 25-year career with federal probation before retiring. The job brought a high level of fulfillment, she explained. Supervising offenders in the federal system opened many opportunities to learn and to play a role in helping individuals who had been released from prison. Sharon enjoyed working with people and mentoring those who wanted help. An academic background in psychology and counseling suited her well for the therapeutic role she played as a probation officer. Still, she understood that her role required that she enforce the conditions imposed upon offenders who returned to society.

I told the class that Sharon had played a role in the decision that allowed me to transition from prison to the San Francisco Bay Area. Ordinarily, people who served time in prison returned to their home community after release. I grew up in Seattle and authorities expected me to release to the Seattle area. Since I’d been in prison for so long, however, I didn’t have roots anywhere. Rather than releasing to Seattle, I wanted to release where I would have the best chance to build my career. I had a high level of support in the San Francisco Bay area because of a relationship I built with a businessman who employed hundreds of people, and I also had good relationships with universities in the Bay area.

With hopes of beginning my life in San Francisco after my release, I began sending “To-whom-it-may-concern” letters to U.S. Probation. Those letters found their way to Sharon Alberts. In the letters I explained that I had stability in that Golden State Lumber had offered me a job upon my release and Lee Nobmann, the owner of the company, had offered me a place to live.

Yet Sharon told our class that some probation officers may not have authorized me to make the move. Rules of probation, generally, prohibited one felon from associating with other felons; I met Lee Nobmann in prison and both of us had felony convictions. Rules certainly did not allow for people who had built friendships in prison to continue those friendships after release. Sharon said that her seniority and experience gave her the discretion to authorize me to relocate to the San Francisco Bay area after my release from prison, but others may have come to a different conclusion.

Throughout her presentation, Sharon told the class that federal probation officers had considerable discretion. Some officers carried firearms and were more oriented toward law-enforcement while others were more oriented toward providing treatment. Without a doubt, Sharon described a tendency toward providing the offenders she supervised with guidance and support rather than threatening them with the heavy hand of the law. That said, she always kept precise documentation to backup all of her decisions.

When offenders tried to take advantage of Sharon’s kindness and violated conditions of their supervised release, she would place restrictions on them with an effort of bringing the offenders into compliance. But if offenders continued to act irresponsibly, she would file the necessary paperwork with the court, sometimes with a recommendation that the judge return the offender back to custody.

Sharon helped those in our class understand her approach to supervising offenders. She described herself as a “straight shooter.” I understood her comment to mean that she would provide offenders with a game plan for them to follow. As long as the offenders did not violate any laws and complied with the conditions of supervised release, the offenders would earn higher levels of trust. Increased levels of liberty went along with that trust.

When offenders failed to comply with the conditions of release, Sharon would take action. She would exercise her authority to nudge them into compliance. As an example, she cited offenders who refused to submit monthly financial reports or participate in drug testing.  Such incompliance would result in Sharon’s making visits to the individual’s home or work. If those visits resulted in red flags, she would ask the offenders for an explanation. Then she would try to work together to come up with solutions. In extreme cases, she would go through the process of filing complaints with the federal court. A judge would make the final decision of whether the violation merited a return to confinement.

Since retiring from federal probation, Sharon said that she has been working with restorative justice projects in Sonoma County. The concept of restorative justice, she explained, differed from the goals of traditional justice. Rather than striving to punish offenders, restorative justice worked to bring a reconciliation with all stake holders, including law enforcement, the victim, the family, the community, and the offender. Those efforts helped the offender appreciate the ways that his wrongdoing influenced the lives of others. From what I gathered in listening to her, Sharon believed that restorative justice made much more sense than our current system of justice, which took a much more punitive approach to criminal behavior.

In the end, I asked Sharon why a supervisor would have a problem with my probation officer visiting my class. Sharon said that all probation supervisors exercised their discretion differently, and Christine’s supervisor saw a conflict and took precautions as she deemed appropriate. I saw the bright side of the development. On one hand, we had the privilege of listening to Sharon, and on the other, by denying Christine and Toni an opportunity to visit our classroom, our students got to see precisely what I meant about the architecture of incarceration’s tendency to preserve itself.