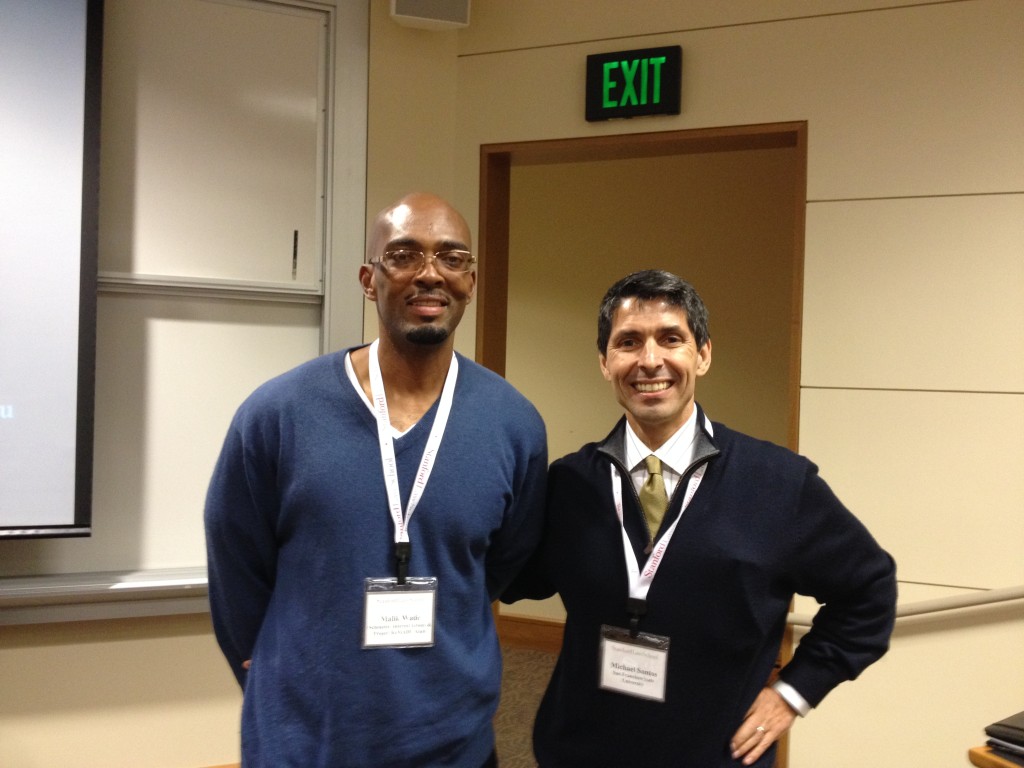 Malik Wade and me standing inside of a classroom at Stanford Law School, getting ready to present

We were fortunate to have another guest speaker for our class on The Architecture of Incarceration during week 13. Malik Wade showed up at the start of our class to provide us with insights he gained during the many years he served in prisons of every security level.

Malik opened with descriptions of his background, talking about what he experienced as a young man growing up in a volatile environment. He spoke about his perceptions while selling drugs, telling the class that he saw himself as a businessman, entrepreneurial but misdirected. His father served time in federal prison, so the thought of confinement wasn’t totally foreign to him. Still, Malik said that he considered himself as entering into business arrangements with willing participants. Over the course of his trafficking experiences, Malik said that he distributed hundreds of kilograms and faced a potential life sentences for his crimes.

Malik’s initial monologue about his background led us into an open discussion about the culpability drug offenders faced for the crimes they commited. This discussion related to our study of imprisonment because of the enormous influence drug laws have had on the growth of prison populations over the past 25 years.

At the conclusion of that discussion, Malik spoke in more detail about his background. He started selling drugs as at 15, and on numerous occasions he found himself in trouble with the law, including numerous offenses related to his possession of firearms. That criminal background resulted in Malik being charged as an armed career criminal when federal authorities arrested him.

Knowing that he would be exposed to a life sentence if caught, Malik tried to evade justice by living as a fugitive for several years. His codefendant had been sentenced to 27 years, and with Malik’s background, he anticipated that his sentence would be even more severe. With that outcome in mind, he contemplated the best place to run. Initially, Malik said that he considered moving to Cuba. But traveling to Cuba proved difficult, so he chose to flee to Canada instead. He crossed the border into Vancouver and then attempted to build a life there.

Malik spoke about the challenges he faced as a fugitive. His legal status kept him separated from his family in the United States, and his status as a fugitive kept him from being able to settle in Canada. After eight years, Malik said that he began to feel pressure from Canadian law enforcement officials. The fatigue of being on the run for long exhausted him. With the help of a friend, Malik maneuvered his way back into the United States by hiding inside the trunk of a car that crossed the border. Not long thereafter, federal authorities arrested Malik and his life began as a prisoner.

Ironically, Malik said that being arrested brought him a sense of relief. He reached what he believed to be the beginning of the end and he looked forward to some sort of closure.  Still, the initial trauma of being arrested caused him to black out for a while.  Authorities handcuffed Malik and their search revealed considerable amounts of currency, which he described as being in excess of $100,000.

Within 20 minutes of his arrest, authorities transported Malik to court for an initial hearing. Wanting to get going with the proceedings, Malik admitted his identity and he began his life in custody, starting off in a county jail. He told the class about the initial experiences of living in confinement, describing the thorough strip search, processing, shower, lice spray, and issuing of the bedroll. Malik helped the class understand his initial thoughts, observations, and feelings about being confined.

While in that pretrial status, Malik told the class that authorities transported him around different county jails for a couple months. Eventually, they sent him from Minnesota, where he was arrested, to Pittsburgh, where he faced the criminal charges. He spoke about the indignity of being shackled with a metal device that prohibited the movement of handcuffs. His tighter restrictions came as a result of Malik’s long status as a fugitive.

After navigating his way around the armed U.S. Marshals that guarded the airplane, he felt a shock to his senses when he saw all of the convicts in chains seated on the plane. He described the prisoners as being angry, all facing lengthy sentences. The experience intimidated him, he said, and he didn’t know whether he would ever get used to being around so many people. Malik felt a need to put on a façade of being tough, hard, and impenetrable.

The plane landed inside and he disembarked into a prison corridor that was the entrance to the Federal Transit Center in Oklahoma City.  After another series of processing and waiting in various bullpens, he was assigned to a housing unit and forced to adjust to the strangers with whom he would share close quarters.

As a federal prisoner, Malik described a need to be extremely cautious because he didn’t know what type of people he would be around and he had concerns for his personal safety. There were too many people living in close proximity, locked in. The entire process felt dehumanizing and, as he said, “psychologically devastating.” He expected that he’d have to live in prison for at least 30 years.

After two months in Oklahoma and a brief stay in Atlanta, authorities finally transported Malik to Pittsburg. The attorney who had been appointed to represent Malik said that he would face a sentence of life plus five years. When the attorney recommended that Malik accept a 15-year plea agreement, Malik said that he accepted without hesitation.

The next step was a presentence investigation, and then the imposition of sentence. Malik had already made a decision to change his life. He wanted to change the way that he thought and he began working to educate himself. Despite expressions of being obstructed by the system, Malik said that by being shrewd he could enroll in classes that other prisoners taught, find mentors, and learn independently by reading.

Education empowered Malik, enabling him to transcend his environment. He found little niches where he could spend his time alone and focus on the goals that he set for himself. Hopelessness, noise, and despair made the learning environment difficult. At times, he described the stress of confinement as being unbearable.

Prison culture differed from the value system that existed outside of prison, but Malik said that he took responsibility for the problems he created and he said that he came to understand and regret the crimes that he caused in his community. Malik didn’t have a single disciplinary infraction in prison, and by the time he transitioned from prison to a halfway house, he felt ready. Yet when he arrived at halfway house, the case manager assigned to supervise him brought tension. She sized him up and described him as being manipulative. He didn’t understand why, as he had never had a dirty urine in prison, never had a problem. As a consequence of frustrations he received in the halfway house, he said that it took seven months to find a job.

Malik finished prison sentence in November of 2012 and began serving his time under the discretion of a supportive probation officer. He now works with at-risk youth and strives to inspire people, or to help them understand more about the prison system.