As indicated in the syllabus, our class did not meet during the seventh week because I had a previously scheduled obligation in San Diego.

During our eighth class, on October 17th, I advanced the discussion from prison classification systems to prison orientation. Specifically, I wanted to help students understand what transpires after authorities classify a prisoner and send the offender to prison.

To guide me through this presentation, I used the following PowerPoint slides: PowerPoint for Class 8

With that aim in mind, I began our eighth class by discussing the hierarchy of a prison system, using the federal system as my reference point. The Attorney General of the United States sits at the top of hierarchy, as he presides over all agencies that fall under the purview of the Department of Justice. The Attorney General relies upon the Director of the Bureau of Prisons to govern the nation’s prison system. Since the Bureau of Prisons is a large agency, employing more than 30,000 people in more than 100 different facilities, the Director relies upon several Regional Directors to assist him with the oversight of the federal prison system. Regional Directors oversee the various prisons within their region.  Each prison has its own Warden, who serves as the chief executive officer of a particular institution.

Those high-level administrators set the tone for the policies and procedures within each institution. Those who work in local prisons and those who serve time in local prisons will observe a chain of command. The hierarchy within individual prisons includes many levels beneath the warden. The executive staff consists of a series of Associate Wardens and an Executive Assistant. The Associate Wardens preside over such areas as Custody, Programs, Facilities, and Industries. The Executive Assistant works as the Warden’s spokesperson and ordinarily interacts with the media.

Beneath the Department Heads, a cadre of staff carries out the functions of the institution. Staff members in the custody department include lieutenants and officers. The programs department relies upon case managers, counselors, and unit secretaries to carry out the functions of the institutions. Case managers, I explained, preside over matters between the prisoner and issues outside the prison, like release dates and custody levels; counselors preside over matters inside of the institution, like approving visiting lists, job changes, or housing assignments. 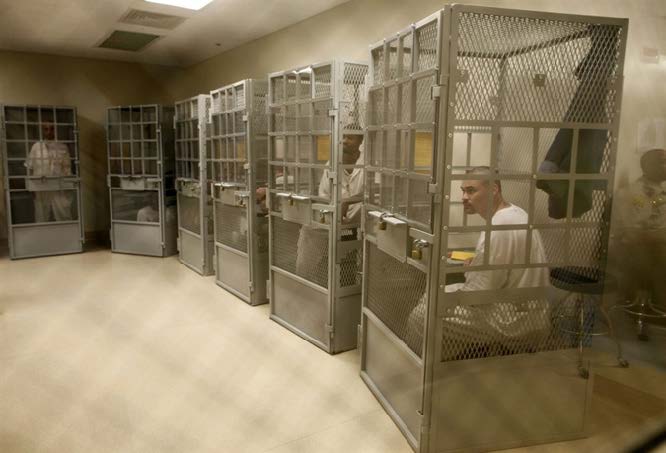 Our discussion about staff hierarchies transitioned into the events that followed a prisoner’s arrival into an institution. The prisoner would be confined inside a series of holding cells or cages while he completed a number of forms. Those data-collection forms provided administrators with the information they needed to categorize the prisoner. Authorities on site and in remote locations would analyze the information. For example, healthcare officials in the prison would monitor whether the prisoner required any special medical attention; counselors would assess the information to assign housing; and officials at a decentralized location would evaluate such matters as whether the individual needed to be monitored for some specific reason, like whether he was a member of a security threat group (STG).

Once the prisoner has been classified, an officer will escort him into the prison housing unit areas. Some will begin serving their term inside the Special Housing Unit, otherwise known as SHU or “The Hole.” That initial placement may be for either administrative or disciplinary reasons. Most prisoners will transition into a regular housing unit, which may be with cells, locked rooms, or open-dormitory type settings. The prisoners should adjust without any expectations of privacy.

Whether prisoners were confined to a dormitory setting or a housing unit with individual cells, staff members would identify their chief responsibility as preserving security of the institution. With a need to preserve security, they would employ a variety of tactics. Those tactics would include regular shakedowns on the never-ending quest to find contraband; they would conduct regular and unscheduled census counts; they would enforce rules that dictated when and how prisoners could move from one area of the prison to another.

We discussed what staff members identify as contraband. Staff members categorize anything that does not flow through appropriate institutional channels as contraband. The item does not necessarily have to be “illegal,” like drugs, although drugs would certainly be considered contraband. Contraband could be something as minor as an individual package of sugar that the prisoner lifted from the chow hall. Prisoners legitimately receive property in one of three ways:

Staff members consider any property that does not flow through the appropriate channels as contraband and they consider all contraband as a threat to the security of the institution. To search for contraband, staff employers routinely search the prisoners quarters; they search the common areas of the institution; they bring dogs that have been trained to search for contraband by scent into the prison for unscheduled searches; they rely upon metal detectors and other electronic devices to find contraband; they routinely perform pat-down, drug-testing, and body-cavity searches on prisoners.

Prisons have the capacity to hold large population levels that frequently reach into the thousands of people. Staff members employ a variety of tactics to keep track of all the prisoners. One method includes regular and irregular census counts. In the federal prison system, census counts take place at the following approximate times:

Officers will require the prisoners to stand for two of those counts, the 10:00 am count and the 4:00 pm count. Wardens may schedule additional counts at their discretion, and security personnel may also require unscheduled counts. To conduct the counts, officers will work in teams, and each member must agree on the number of prisoners they count. Staff members follow these census count policies so they can account for all prisoners at all times.

Prisoners must abide by strict schedules that require them to remain in specific locations within the prison at specific times. In secure institutions, strict rules government when the prisoners can move from one location of the prison to another location. They rely upon written passes from staff supervisors or they may move during controlled periods of movement. These strict controls provide staff members with accountability of the people inside of the institution.

Please Click on the following Link to Slides that Guided me Through the Class Eight Lecture: PowerPoint:

A PowerPoint guided me through this lengthy lecture that I delivered to help the students understand more about day-to-day operations inside of the prison. Then, during the final hour of class, I broke the students into six groups for a class exercise. The group exercises, I think, provide the students with an opportunity to confront the problems that those who work in corrections face on a daily basis. Each of the groups represented a different faction of the staff hierarchy, and I presented a specific problem for each group to solve. A description of the groups and the problems each group had to resolve follow:

You become aware of an incident in a high-security penitentiary. A prisoner who has been identified as a leader of a security threat group has been accused of murdering an officer. The prisoner has not yet been convicted of his offense and he is pleading not guilty to the crime. The prisoner is already serving a life sentence. His leadership of a prison gang gives him a high level of influence over hundreds of other prisoners who serve life sentences in other penitentiaries. What precautions can you take in your position to preserve security in the prison system?

You preside over a low-security prison. All of the prisoners in your facility will be released within 20 years. More than half of the prisoners will return to society within three years. What mechanisms can you implement to balance the need to preserve security with the need to prepare offenders for law-abiding lives upon release?

You work in a medium-security prison. Prisoners in your facility serve lengthy sentences. Many of the prisoners do not have release dates because they’re serving life sentences. Your institution has a policy of requiring prisoners to return to their cells for lockdown at 9:30 pm each evening. The end of summer is approaching. More than half of the prisoners in your institution want to watch Monday Night Football games, but lockdown procedures interrupt the game. How will you resolve this issue, balancing the needs of security with the volatility of your prison’s population?

You work in a secure prison that holds long-term offenders. One of your officers discovered a stash of contraband in a common area of the prison. That contraband included several balloons of marijuana and a cellphone. You don’t have any leads on who stashed the contraband, how it got there, or how long it has been there. What options do you have and what are the risks associated with each?

A prisoner approached you in confidence. He expressed his commitment to prepare for a law-abiding, contributing life upon release. In support of his commitment, he showed you the work that he has been doing to educate himself. But he described a personal crisis that has surfaced. His wife announced that she wants to move on with her life and she served him with divorce papers. Without her, the prisoner said that he didn’t see the reason to continue the path that he has been pursuing. Nothing matters to him any more. He said that he has lost his motivation to go on. What concerns do you have about this individual and what options are open to you?

You have a huge problem with theft and loss. As leaders of your department, you’re expected to fulfill your duties with a given allotment of funds. But your inventory each quarter shows that you’re continuously losing products that you purchased. Tools, food, and other items seem to disappear. What options do you have to ensure that you fulfill the duties of your department, given your budgetary constraints?

The students discussed the problems within their group, then a group spokesperson revealed the ways that the students would respond to the problem presented. After listening to the student responses, I shared what I observed as a long-term prisoner.