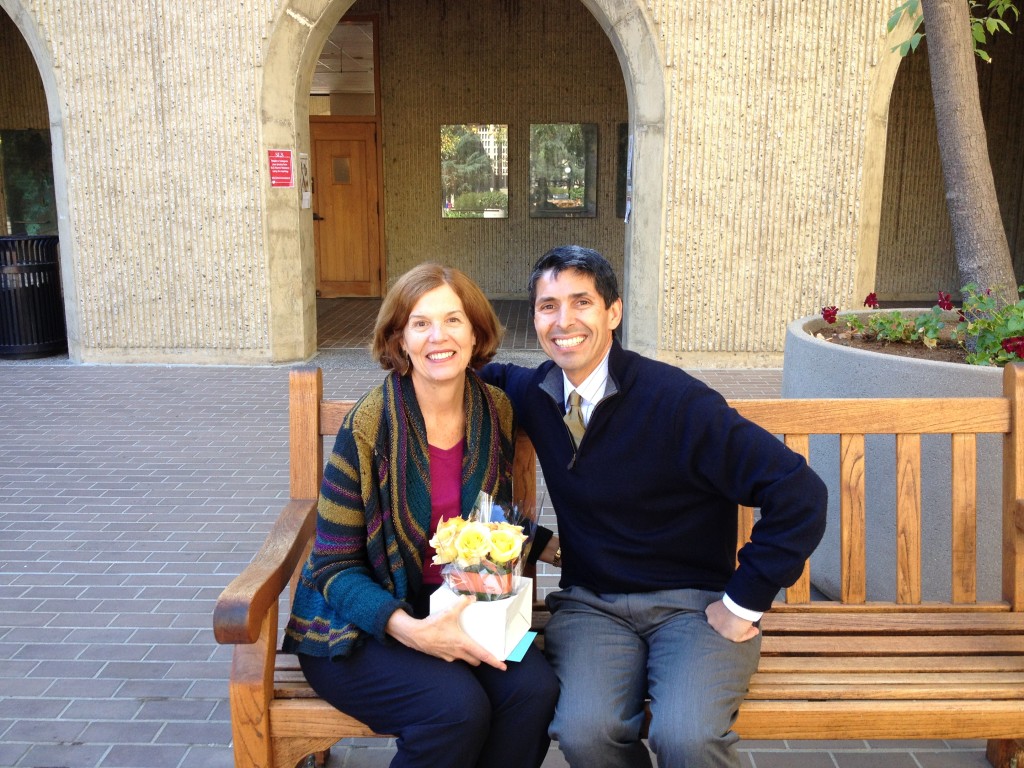 With my friend Professor Joan Petersilia at Stanford University

Michael Santos: A journey back to society

I am writing to introduce Michael Santos to the readers of The Partnership for Community Excellence. Michael is an amazing and inspiring person and I encourage all of you to read closely the insights he will be sharing in the coming months about his personal prison reentry experiences.

Over the past several years, I have become friends with (and a great admirer of) Michael, a federal prisoner who was just released on August 13, 2012 after serving 25 consecutive years in federal prison for distribution of cocaine.
There were no weapons and there was no violence involved with his case and he had never been incarcerated before that arrest when he was 22. Nevertheless, the judge imposed a 45-year sentence. Michael is now living in a federal halfway house in San Francisco. He will be there for several months and then likely settling in the Bay Area.

Michael is unusual in that he became quite a scholar while behind bars — earning degrees, writing several books (e.g., About Prison, Adjusting to Prison, Earning Freedom). You can see a picture of Michael and his lovely wife, Carole, along with details of his life on his blog. Carole and Michael have been together for 10 years and she has stood by him throughout his prison term. She also writes about being the wife of a long-term prisoner in her blog.

I wrote a letter supporting Michael’s petition for parole release. I had never before written a letter supporting a release action for any prisoner. But Michael’s case was so compelling that I had to write. I felt he was the safest possible candidate for release. Not only does he enjoy an existing support network from his family and the wider community, but he also had a great future awaiting him in productive work. In fact, he already has a job. But what he most wants to do now is help other prisoners reintegrate successfully, inform the broader community about prison life, and help reform draconian justice policies. To foster these goals, Michael will begin sharing his reentry experiences—the challenges and the joys—on this website.

I encourage you all to follow his journey, as I know his insights will benefit us all. Also, please join me in welcoming Michael and Carole as they join our community. We wish them all continued success!