Shon Hopwood, author of Law Man: My Story of Robbing Banks, Winning Supreme Court Cases, and Finding Redemption is the embodiment of Earning Freedom. I’m proud to call him a friend. 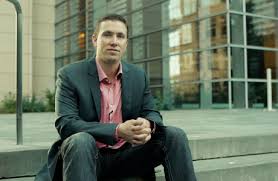 While confined inside the Taft Federal Prison Camp, I received a manuscript from Shon’s editor at Random House. The editor asked whether I would write an endorsement for Law Man. Although I’d never endorsed a prison book before, I happily wrote a blurb for Shon because his inspiring story impressed me like no other. In today’s Earning Freedom episode, Shon and I had a conversation about steps necessary to emerge strong after a decade in prison.

As a young man, Shon made some bad decisions. He used drugs and robbed banks. While incarcerated, he taught himself the law through independent study. Each day he read books that were available in the federal prison’s law library. Other prisoners approached Shon and asked for his help. One friend requested assistance in filing a Writ of Certiorari to the United States Supreme Court. The Supreme Court agrees to hear only a fraction of cases each year from the thousands of white-glove law firms requesting review. In 2010, only 1.8% of all cases that applied for Supreme Court review received a hearing, according to Supreme Court Press.

Against all odds, the highest Court in the nation agreed to listen to the eloquent, but novel argument that Shon articulated in his brief.

Needing a lawyer to represent the case at the U.S. Supreme Court, Shon reached out to Seth Waxman, the former U.S. Solicitor General and current partner at the elite WilmerHale law firm.

Mr. Waxman agreed to represent the case—without charge—that Shon initiated. Then Mr. Waxman became a friend and mentor to Shon during the remaining years that he had to serve in federal prison.

Upon Shon’s release, blessings continued to flow his way. He earned his undergraduate degree. Then Adam Liptak of the New York Times published an article on Shon’s story, bringing more attention to his amazing journey.

Shon later lectured at Harvard. The Bill and Melinda Gates Foundation gave Shon a full scholarship to the University of Washington Law School. And Random House issued him an opportunity to publish his story in a book.

Shon continues his amazing journey, as he is about to begin two-year fellowship at Georgetown Law School. When he concludes, he will have earned his LLM degree, opening further opportunities for him to contribute . He plans on continuing his journey of servant leadership, working to represent the indigent and building a better judicial system.

I’m incredibly proud to share the amazing store of Shon Hopwood’s redemption with the Earning Freedom network. I encourage you to subscribe to our program on iTunes so that we can inspire more people to pursue excellence and earn freedom.