So proud to feature Dr. Jesse De La Cruz, a formerly incarcerated prisoner who emerged incredibly successfully–as a doctor of education and judicial expert. Check out his resume. Listen and watch his amazing two-part story on Earning Freedom, at MichaelSantos.com 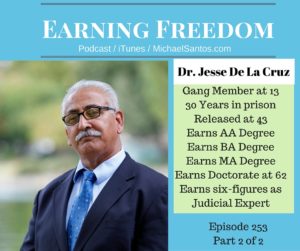 My involvement with gangs spans 50 years, beginning with my initiation into a street gang at age 13. In 1973, at age 21, I became a member of the Nuestra Familia prison gang while serving time at Deuel Vocational Institution (DVI). I left the NF once I was released from prison in 1976. After my defection from the gang, I maintained a high degree of respect from my street gang homeboys simply because I never testified against any of my former Homeboys. In the course of my criminal career and going in and out of prison for twenty-eight years, I witnessed the proliferation of gangs. Mostly, I observed all the superficial, and few substantial changes between old and modern gangs. In 1996, I was released from prison for the last time and have turned my life completely around. However, as a result of my multiple gang involvement (street and prison), and my many years in different jails and prisons throughout the state of California, Texas and Washington, I have developed a unique and thorough insight into the gang phenomena that neither law enforcement nor academics can ever achieve because they have never been on the inside of a gang or served time in jail or prison.

Since leaving prison for the last time on April 2, 1996, I have earned three University degrees and each of my degrees has been primarily the study and research of gangs. It is due to these distinct achievements, coupled with my personal experience, that I have been qualified on many occasions to testify as an expert witness.

I have testified in:

I have also participated in aiding lawyers in preparation of testimony and given opinions on approximately 95 gang cases. Currently, I am working one death penalty case in Tulare County and a post conviction death case with the Habeas Corpus Resource Center in San Francisco CA. I have also worked with the Federal Public Defenders Office on a case out of Sacramento, CA on a post conviction case and two other post conviction cases in Oregon. I am also currently working on four R.I.C.O. cases and expected to testify late October or early November on one R.I.C.O. case in Harrisburg, Pennsylvania.

Consultant & Mentor for Fathers & Families of San Joaquin: I currently work with and mentor gang members who are interested in leaving their gang. I provide the gang member guidance and resource information that will facilitate their transition from the gang lifestyle into mainstream society.                        On-Going

Some cases I have testified on and/or participated as a gang expert/consultant:

Defendant found not guilty of

Jury Hung 11 to 1 for acquittal

As a Result of my Testimony

Gang Enhancement Dismissed After My Testimony at Preliminary